These example questions touch on the following topics:

The speed of the vehicle in metres per second is therefore:

The main drive axle of a small robot vehicle is driven by a stepper motor via a gear box with a gear ratio of 10:1 (the axle rotates once for every ten revolutions of the stepper motor). Two wheels of radius 7.5cm are connected to the axle. The stepper motor moves in increments of 1.8 degrees at a maximum stepping speed of 500 steps per second.

Begin by finding out what happens when the stepper motor moves one step.

So each time the motor steps, the axle rotates 0.18°. The wheel circumference is:

The distance moved per step is therefore

The distance moved per step is the smallest distance greater than zero that the robot can move. The maximum stepping speed is 500 steps per second. Therefore, the robot’s top speed is 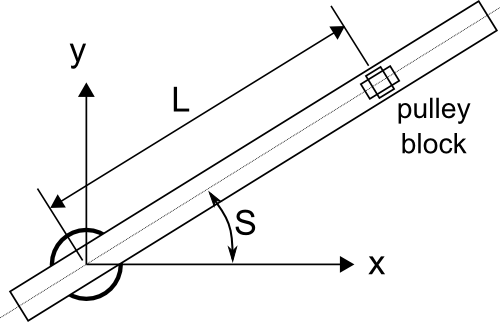 Forward kinematic equations of the crane:

Inverse kinematic equations of the crane:

I have made the assumption here that x and y are positive. When that assumption is not valid, S can be identified unambiguously by checking the signs of x and y.

So the values for S and L are correct.

The two segments of a SCARA robot have length L1=40cm (shoulder to elbow) and L2=30cm (elbow to wrist) respectively. The shoulder angle is S and the elbow angle is E. The robot arm is oriented so that the end effector always moves in the horizontal x-y plane.

The SCARA arm is shown below. 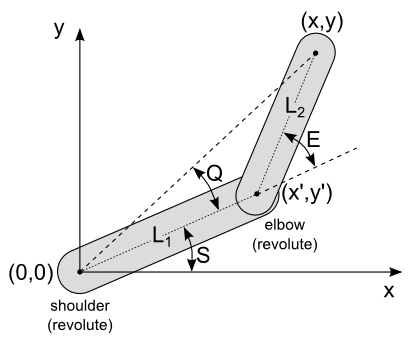 First, we obtain an expression for the elbow angle by applying the cos rule in the triangle (0,0)(x’,y’)(x,y).

So, the shoulder angle

Both angles are correct.

Assuming that the dsPIC is running at 30MIPS (i.e. Tcy=33ns) and that the PWM timebase prescaler is set to 64,

Setting the PWM period to 20 ms

seconds. Every time the PTMR register value reaches the same value as the one stored in the PTPER register, PTMR is reset to zero and a pulse begins at the PWM output pin. PTMR continues counting upward in steps of one. When PTMR is equal to exactly half the value that’s stored in PDC1, the pulse on PWM output 1 ends. The same is true for PDC2 and PDC3 with regard to PWM outputs 2 and 3.

We have the following formula for the PWM period,

Calculating the PDC value for a given angle

According to the question, pulse widths between 1-2 ms represent the range of angles between 0-180°. A pulse will be delivered every 20 ms and every pulse will be at least 1 ms in length – the question is how much longer than 1 ms will it be. The “extra bit” of the pulse duration could be anywhere between 0 and 1 second, depending on the desired angle.

Here’s the formula for pulse width in terms of target angle S (in degrees):

Here’s the formula for pulse width on PWM channel 1 in terms of the PDC1 register value:

Combining the two previous formulae yields the following equation, which will form the basis of the set_shoulder_angle function.

Ok, let’s put that into a C function:

The PTPER register only needs to be set once at the beginning of the program (e.g. in configure_pins()) in order to continuously generate pulses at the right frequency.

The SCARA arm from the previous question is to be driven through a fixed sequence of four positions repeatedly, moving once every second.

Part of the dsPIC’s C program is shown below. Complete the main function.

The required C program must implement the inverse kinematic equations to work out joint angles from the specified cartesian coordinates. Here it is:

Question:
PTPER is one of the dsPIC’s special function registers – it controls the PWM period. It is a 16-bit register and stores an unsigned integer value. What are the maximum and minimum values it can store?

The maximum binary number that can be stored in a 16-bit register is just the 16-digit binary number where every digit is a “1”, i.e.

So the maximum value that can be stored in PTPER is 65535.  The minimum value is the 16 digit binary number where every digit is a “0”, i.e.

Similarly to the previous question, the largest 10-bit binary number is

and of course the smallest 10-bit binary number is zero.

In the familiar decimal number system, we are used to each digit representing a multiple of a different power of ten. For example,

A 10-bit analog-to-digital converter (ADC) has an input voltage range of 0V-5V.

Since the result of each conversion in a 10-bit ADC is a 10-bit binary number, it can only represent 1024 different voltage levels. The input voltage range of the ADC in the question is

, so the quantisation voltage,

(the difference in voltage between two adjacent quantisation levels) is

. The rest of the quantisation levels are distributed uniformly between the minimum and the maximum. Therefore, if the input voltage

produces an output value of 112, then we can calculate

A PT100 sensor is being used to measure the temperature of an industrial process. Its resistance at 0°C is 100Ω. Its resistance increases by 0.385Ω with every rise of 1°C in temperature. The PT100 has been placed in series with a fixed 200Ω resistance to create a potential divider as shown in the diagram below. 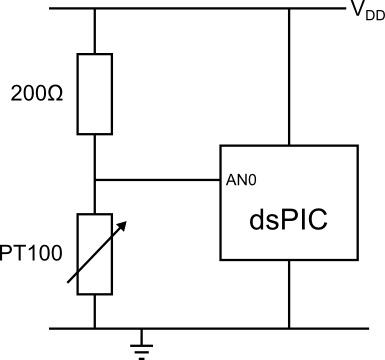 The output voltage of the potential divider is connected to analog input AN0 of a dsPIC. The input voltage range of the 10-bit ADC is 0-5V. The supply voltage in the circuit,

The steps to solve this problem are as follows:

At 200°, the potential divider output voltage

The ADC result for an input voltage of 2.347V will be

Therefore, 480 will be the threshold value for the ADC readings. Here is the C program:

An electric fan has a rotating dial for controlling the motor speed. The dial, which can rotates through a 180° range, is actually a variable resistor. It’s resistance varies from 1kΩ when the angle equals o° up to 10kΩ when the angle equals 18o°. A microcontroller, which controls the motor speed via PWM, needs to sense the changing resistance of the dial.

In this problem, the quantity we are trying to measure is angular displacement (i.e. rotation) of the dial, which is represented by its variable resistance. The analog input of the dsPIC measures voltage rather than resistance, so a simple circuit is required to translate the variable resistance of the dial into a variable voltage. We achieve this by placing the dial’s resistance in series with a fixed resistance to create a potential divider, as shown in the following diagram: 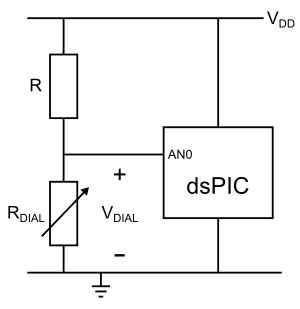 Depending on the value of R that is chosen, a different range of voltages will be produced as the dial rotates through its full range of motion. A bigger variation of voltage is better because it will span more of quantisation levels of the ADC, providing higher resolution in the angle measurement. A reasonable rule of thumb for selecting R is to simply choose a value midway between the maximum and mimimum values of the variable resistance (1kΩ and 10kΩ in this case). A better approach again is to look for a resistor value that is close to the geometric mean of

. Such a resistor would satisfy the following property:

I am choosing 3.3kΩ as a reasonable approximation to this. Let’s calculate the maximum and minimum output voltages of the potential divider. When the dial resistance is at its minimum value (1kΩ), the output voltage will be

Similarly, when the dial resistance is at its maximum value (10kΩ):

Question:
A sensor which produces an analog output voltage between 0V-5V has an output impedance of 100kΩ. The sensor is connected to the analog input of a microcontroller. According to the data sheet provided by the manufacturer of the microcontroller, the sampling capacitance is 10pF and the series resistance due to the solid state switch at the input is less than 5kΩ. To ensure valid readings from the analog input, it is important that an adequate sampling time be allocated to allow the sampling capacitor to charge (or discharge) to a steady state voltage before commencing each analog-to-digital conversion. Calculate a suitable sampling time.

The total combined series resistance is 105kΩ and the sampling capacitor is 10pF. When the sampling switch closes, the capacitor begins charging or discharging, possibly asyptotically approaching a steady state. A handy rule of thumb is that after five time constants, the system will be as close as it will ever need to be to the steady state.

The time constant of the ADC input circuit is

A sampling time 5 times longer that the time constant. That’s